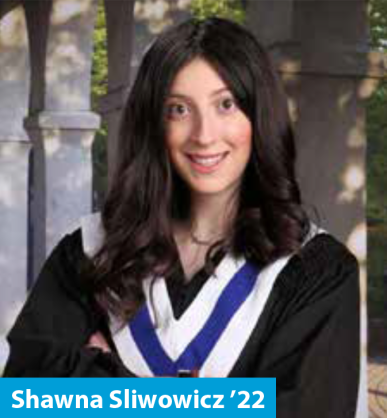 Shawna Sliwowicz ‘22 spoke for hundreds of students and their families when she expressed sincere thanks to the vision and generosity of the donors who made our tuition accessibility initiative  possible.

“I was fortunate to attend a Jewish Day school from the age of 4. While I was eager to continue my Jewish education in high school, the financial commitment was quite significant, deterring me from TanenbaumCHAT in favour of my neighbourhood’s public school, one of the top high schools in the city. Little did I know that on March 6, 2017, a quite typical Monday, the trajectory of my life would change. The announcement of an unprecedented donation made my family’s decision to choose TanenbaumCHAT easy. Reducing the tuition by nearly $10,000 per year enabled me, along with hundreds of other students, to pursue the dream of attending a Jewish high school, to immerse ourselves in a cornerstone of Jewish life at a very formative time in our lives.

Today, I stand in front of my cohort of 278 peers. We are the largest graduating class to emerge from one location in over a decade – and this is a testament to the generosity of donors who have supported tuition accessibility. More than 20% of our grade is composed of New Stream graduates, corroborating the idea that it is never too late to foster a connection with the Jewish community; that once the affordability barrier is lowered, a plethora of opportunities opens up.  Our grade has exemplified student excellence – taking on countless leadership roles, and representing TanenbaumCHAT at various inter-school and international competitions. Soon we’ll be pursuing a multitude of post-secondary programs as well as studies in Israel.  These opportunities would not have been a reality for as many of us without the generous donors who made this possible.

Unique to our grade, we were fortunate to attend TanenbaumCHAT for four of the five years of the tuition Initiative. This visionary gift has had a domino effect, revolutionizing access to our community Jewish high school. By investing in our education, you have played a vital role in strengthening the next generation of Jewish leaders and ensuring the longevity of the Jewish community. We thank you for your vision and your generosity.

And me? I thank you for allowing me to make my decision to come to TanenbaumCHAT. It has undeniably shaped my Jewish identity and encouraged me to take on roles in the Jewish community I never thought I would. If not for TanenbaumCHAT, I would probably not be quoting a famous rabbi in this speech, but here I am. As Rabbi Jonathan Sacks z”l perfectly stated, “Acts of kindness never die. They linger in the memory, giving life to other acts in return”.